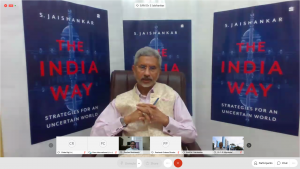 Prioritizing our work over leisure is the new norm of our hustle culture. However, 2019 Padma Shri recipient and Minister of External Affairs, India, Mr. S. Jaishankar would disagree.

After a heartwarming anecdote shared by our honorable Chancellor Dr. S. B. Mujumdar about the genesis of Symbiosis as a platform for dialogue between foreign and Indian students. We also got to hear about Dr. Jaishankar’s father delivering one of the first few lectures at Symbiosis on Indo US relations. 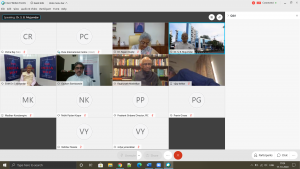 As Dr. Gautam Bambawal was handed the stage he began by asking Jai Shankar about the two individuals he dedicated his latest book to. He first talked about the close bond he had with his father K. Subrahmanyam. From a very young age, he would have open discussions with his father at the dinner table about the world and politics. Over time he developed an interest in these matters because it was an integral part of his upbringing. Often when arriving home after a posting abroad, his family members would tease him for ignoring them and sitting in his father’s company to discuss politics and global issues. This strong bond has always influenced his way of thinking hence the first dedication was to his beloved father.

For the second dedication, Jaishanakr entails an intriguing story while working as a ‘provisioner’ under Aravinda R. Deo in the foreign ministry at 22. Aravinda asked Jaishankar to explain his mentality on diplomacy with the help of a book. In hopes of giving a witty answer, he called back to Harold Nickelson. While this answer was appreciated, Aravinda left him astounded with his answer being “The Godfather”.
“He knows exactly what to say and how to make fair deals”.

When we begin to look at our daily life from the point of view of a diplomat, we notice the multitude of sources from which we may take inspiration. As Aravinda mentored Jaishankar he helped expand his point of view. Instead of approaching issues from just the mentality of someone from Delhi, he helped widen his vision to address issues as an Indian first.

From this question, we pivoted to the center of the discussion. “I want people to understand that we don’t have to look outside for wisdom when we have our rich heritage” Jaishankar had completed reading the “Mahabharata” an Indian epic before he was 10. With every read that followed however he discovered a new interpretation of the evergreen tales.

Over time he realised that if we extrapolated every story from the Mahabharata and placed it on a global platform, we could discover new approaches to diplomacy, statecraft, and international relations. Most schools of thought believe that fiction and real-life application are to be separated. But when we look to western societies they openly embrace and apply lessons attained from their mythology. So he asked the audience a simple question, “Why do we shun our own epics?”

Harmony and the acceptance of different ideas are at the very core of Indian mythology. So when asked about the border disputes with China, he highlighted “The Indian Way”. One of dialogue and support. India has created its mark in our region over the 5 years providing the maximum support and taking on global support. This is partly because we approach these issues for reasons. Ethical and Strategical. It would be unethical to ignore the cries of the affected innocent but simultaneously, helping these nations increases the strength of our relationship with allies.

The discussion finally shifted to India’s competition with China. However, Jaishnakar felt that we shouldn’t have to compete with ‘only’ China or any other nation. India is competing with the world and at the same time just ourselves. This shouldn’t be some mindless race but a planned and controlled strategy for progress. Growing faster would be great, yes! However, when we look back at the last 25 years of progress he highlights our emphasis on importing services and goods while failing to develop a support system for the longevity of our small-scale industries. We also failed to invest in our vast human resources, a field Japan prioritized. Finally, he reiterated his point on the importance of intellectual atmanirbharta. Reminding everyone that we must learn to efficiently steal from other nations but not copy. Rather we should interpret it from the frame of our Indian ethics and values.