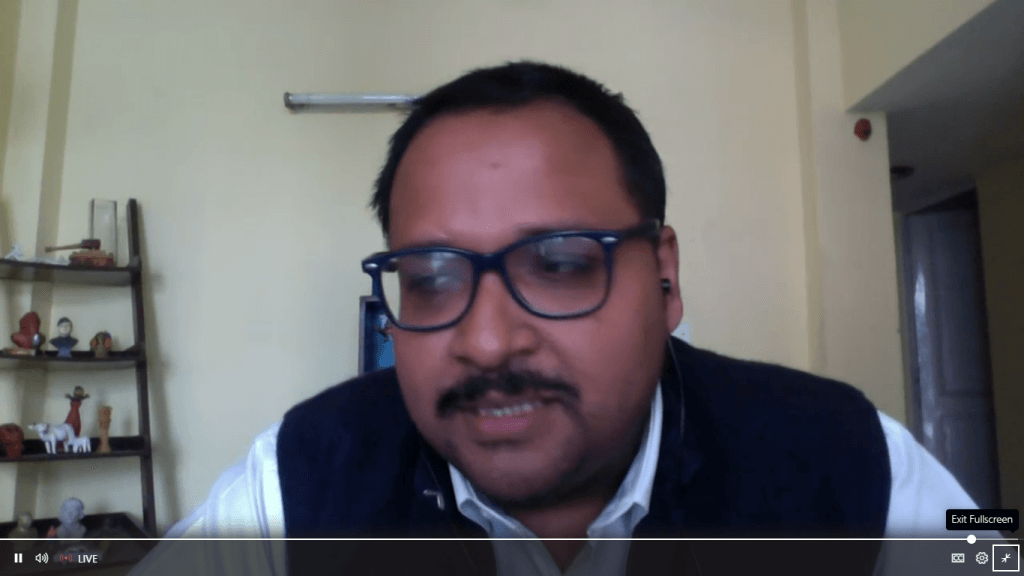 With the world anticipating the U.S. election results with bated breaths —all eyes turned towards the country’s tense political climate, Symbiosis Centre for Media and Communication invited the Political Journalist, Shoaib Daniyal for a Guest Lecture as a part of its Masterclass series on the 7th of November.

However, Mr. Daniyal was not here to talk about the American Elections. He spoke on a topic that was at the very heart of Indian Politics: the practice of Federalism.

The well-known reporter for The Scroll.in started off by emphasizing the unique im­portance of Federalism in Indian Democracy and how essential it is to the working of the country. He explained the 2 tier structure of the Indian Federation – The Centre and The state and the common confusion that one faces over the distribution of responsibilities between the two. He spoke about the recent power-cuts faced in the state of Punjab which took place because the Indian Railways had stopped the entry of goods trains into Punjab. With the Indian Railways justifying this by accusing the state of Punjab of not attending to Law and Order; and Punjab accusing the Railways of stopping the trade in order to punish the farmer agitation—it clearly demonstrates the unique political issues our federation faces.

He went on to elucidate that the distinctive form of federal government exists in India because of the system created by the British which dates back to the 1930s. The system enabled the British to control the nation from the Centre, whereas Indian rulers controlled the states. They also introduced the State, Concurrent and Central Lists; a concept that is still prevalent in the Indian Federation today. This structure is core to understand present-day Indian Politics.

He added that another function unique to the Indian Federation is the power of the Centre to create and destroy provinces, much like the abrogation of Article 370 and the division of the state of Jammu and Kashmir into union territories.

Moreover, he explained that India being one of the most populated and diverse countries, second only to China, creates natural conditions for Federalism. With each region having their own varied problems, a Federation becomes not only a legal need but also very essential. He gave the example of the COVID-19 Lockdown that was imposed by the Centre earlier this year in March; and why it partially failed because of the diversity and varied problems faced by our country right from the farmers to the migrant labourers.

The session progressed with an interactive Q&A session which discussed the particular issues of the Federation, ranging from the CAA-NRC controversy to the GST and its intended reasons for the imposition and also the importance of fiscal federation in the nation. He also spoke on the dynamics of ‘one man one vote’ and the layered complexities of the system.

Mr. Daniyal discussed at length with the director of SCMC, Dr. Sreeram Gopalkrishnan and Prof. Vidya Bhushan Arya, the power of the Centre with the context of the Article 370 issue of Kashmir.

He remarked “The Linguistic States are the pillars of the Indian Federation. We must appreciate it, take it into account and move on.”

The session was wrapped up with an emphasis on how necessary it is for the Centre and the States to engage in healthy communication in order to make decisions regarding the country and how this coordination is central to the Federal set-up.