Twitter this week was ablaze with the debate surrounding Zomato’s decision to include 10 days of paid leave for all those who menstruate as ‘Period Leaves’. Though companies like Gozoop and Culture Machine are pioneers of Menstrual leaves in India, a household name like Zomato has clearly garnered more attention. While both sides of this contentious argument make their own valid points; let us first appreciate that words like ‘periods’, ‘menstruation’ and ‘bleeding’ have become less taboo, replacing the cringing, flinching, and frankly boring overreactions of the past. 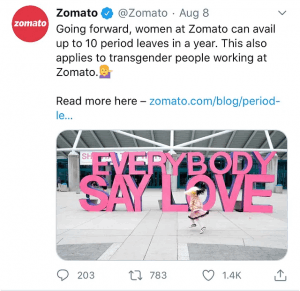 With India on rank 112 out of 153 countries on global gender gap index by the World Economic Forum’s Global Gender Gap Report 2020; many activists have noted that such steps make the workplace more accommodating and comfortable because a significant part of the workforce experiences painful periods. Often menstruating people have to take strong painkillers to continue working, prioritising work over health. Devleena Majumder, HR president at Culture Machine says, “We are biologically different, and we need to acknowledge that.” It also works to destroy the stigma around periods and spread awareness. The advantages of this policy don’t need much elaboration. 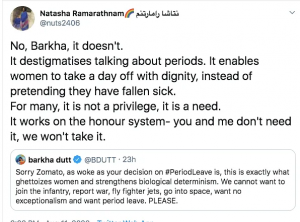 Looking at the flip side, a Local Circles survey in 2020 found that many start-ups hired fewer to no women due the financial strain of maternity leaves, so period leaves could have similar impact. Such holidays can also justify lower pay and other forms of discrimination towards those who bleed, which just sets us back to the 18th century notion that women are unfit for work. Especially in a country where girls are known to drop out of education because of menstruation, such negative reinforcements can be disastrous. Countries that have enforced such policies have had problems- in Japan, the percentage of women who applied for menstrual leaves dropped from 20% to 13% due to societal pressures while in Korea, men claimed it was a form of reverse discrimination. Then of course, there is the question of such “privileges” being misused and being against “equality”. Ironically it should be noted that the last point was also put forward when maternity leaves were a hot topic. Now we obviously don’t think of maternity leaves as a privilege; views change over time.

There is another solution- instead of a blanket leave, those who need such leaves can avail them. However, that is a debate for another day. Interestingly, such steps are a definite sign that companies are starting to view their workers in a more humane way. They seem to have learned that relaxed working conditions with minimum stressors increases productivity. Not to mention how it is good PR for Zomato, both in terms of media impressions and likeability. 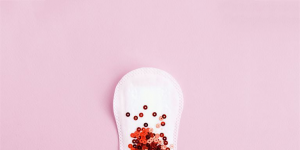 I’ll leave you to make your own stand, but do look up other resources for better opinions. Like this piece- If men could menstruate, by Gloria Steinem. In short, if you don’t get periods, or if your period is not painful, don’t take a holiday. Don’t make life difficult for those who do. It’s as simple as that.