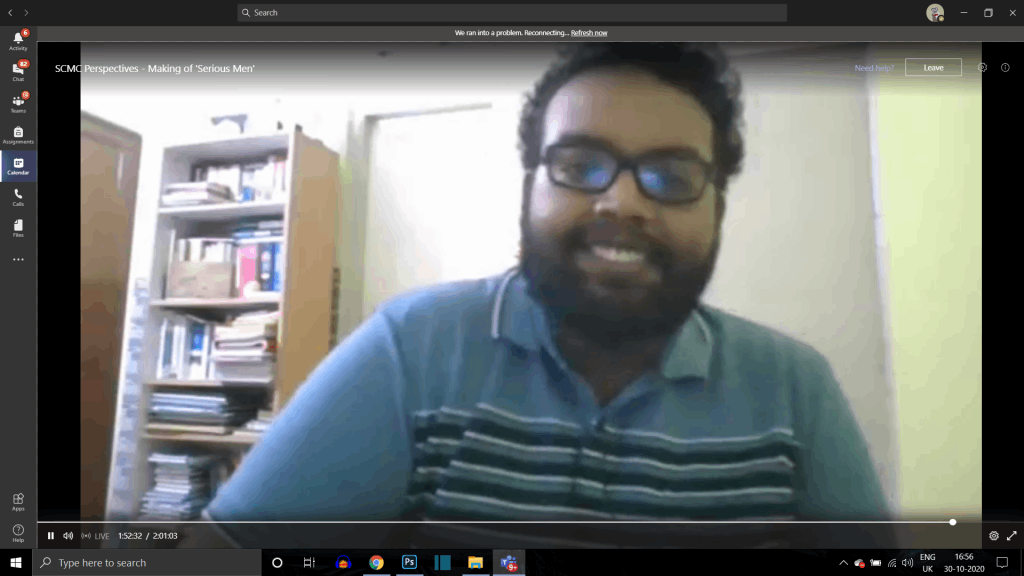 The title says OTT Guru because this guest lecture was given by a man who has carved his niche in the dynamic farrago of online content consumption. Mr. Mayukh Ghosh is a graduate of St Xavier’s College, Kolkata and SIMC, Pune; he has gained international recognition with his documentaries, shorts and series. He has been a screenwriter and director for several renowned works such as Nawab and Hostages; so it was obviously a great honour to listen to the insights of a true and successful industry professional. On the 30th of October ‘20, as a guest lecturer for SCMC, he spoke about his most recent endeavour, working as the Associate Director for the much-acclaimed film on Netflix, Serious Men.

This lecture was not just an arbitrary rant of working on a film set but rather an organised and well-polished approach to the whole OTT system. Mr Ghosh began by explaining that Netflix is merely a studio and a platform for the right kind of content to be showcased on the same. They back and budget the projects and have little to no interference creatively. This is probably the reason why we get to choose from such a plethora of differently made movies and shows on these platforms.

Serious Men is actually an adaptation of a book of the same name, authored by Manu Joseph, who owns the rights to it. Bombay Fables takes an “option” from Manu Joseph to develop the film, an “option” is basically just a commitment that is bought with a lot less money, that curbs the author from selling the rights for a particular period of time. Next, Bombay Fables approaches Director Sudhir Mishra (of Cineraas Entertainment) and they pitch the movie to Netflix for approval. Netflix only approves the film if they are satisfied with the Story, Screenplay and Budget of the same. Approval is absolutely essential, since the whole project depends on it. Netflix then buys the rights from the author and makes both Bombay Fables and Cineraas Entertainment the producers of the film.

One of the biggest takeaways from the lecture, in Mr. Mayukh Ghosh’s own words, was that “The Script is Bible”; everything revolves around it so before the wheels begin spinning with full speed, it must be analysed and interpreted down to the most trivial nitty-gritty. This process is called the Script Breakdown. Here, the finest details of the story are interpreted into what will become a film eventually, for example, the colour palette and the set props; this is where a lot of work is delegated to other departments and people like the Set Design Researchers and Production Department.

Mr Ghosh also tells us how superhero movies aren’t the only ones that use VFX; in fact even the most normal and real movies may do so creatively and effectively. Even in the Ayyan House in the film, everything outside the windows seen from inside was VFX. There were other scenes such as the night sky, that used the same as well.

Many efforts went into finding the right chawl for the movie, but eventually, the colour palette and atmosphere that was decided matched that of BDD Chawl and it was chosen eventually. The school, St Agnes International was mostly shot on location except for a few components that had to be made.

The Treatment Session followed, which basically involves symbols, mood boards and background action planning. Many things aren’t mentioned in the script but are implicitly incorporated in the scene that hit the subconscious. They are kept in the background and are generally overlooked, but they actually let us know things that did not have to be vocalised by the characters. Mood Boards are references that help creators take inspiration from other movies and clips that have lighting and sets that are a likely match for the script at hand. Background action is planned to enhance the mood, create an atmosphere and bring out dynamism in the scene.

One piece of information actually ended up surprising even those who had watched the movie before the session; Mr. Mayukh Ghosh had actually made an appearance in the movie as an agitated scientist. He used this example to explain the creation of characters beyond the script that add to the overall realism of the same.

The cumulative knowledge that we gained from this session cannot possibly be put into one article and it is something that we imbibed from actually attending it; it was an absolute pleasure and a very fruitful learning experience for us to listen to Mr. Ghosh and all his anecdotes from his time in the industry so far. Having done so much at such a young age, he has proven that boundaries that people set for us are simply obstacles that they themselves have faced, it is absolutely imperative to listen to what your heart and instincts say.

We ended it with a Q&A session in which some of the major questions were as follows:

For him, working on a series like Hostages which was an adaptation from an Israeli Series, was a painstaking process of how to merge that storyline into the Indian cultural fabric; whereas, Serious Men truly taught him to pull the creative thoughts and ideas out of his head and help manifest them through the movie. Both these projects were immersive experiences in their own way.

2. How do filmmakers carry out improvisations that differ from the script?

In his experience, filmmakers shoot quite a few options if they decide to improvise so that there is a wider plethora to choose from as the film is being put together. And improvisation is proof that everyone always sees the film differently in the beginning than they do in between and at the end.

3. What do OTT platforms offer to content creators in the future?

The best part of the OTT platforms is that they do not interfere with the creative process of the project once the approval goes through and they back it whole-heartedly. Even though it is a closed process, it is definitely an approachable one as it values growing talent.

Manish Hingorani Sir presented the Vote of Thanks and the Certificate of Appreciation to Mr Mayukh Ghosh after which,  Manish Sir asked him if he had any plans of moving on to commercial cinema; he replied saying that he was not cut from that fabric but he was completely open to it.

Aalokbarsha Bose from the batch of 2023, closed the session; he bid us farewell and this very ‘Serious’ session came to a sanguine and inspirational end.

Previous PostA Walk Through the Interface Between Heritage and Media with Suyash KhareNext PostAditi Parida shows us how there is no Substitute for Hard Work!
0Shares