Sanbarta Ghosh, a student of Batch 2022 recently released his film called ‘Dhaar’ on YouTube. Soon, the film found its way to other platforms and now is streaming on Disney + Hotstar. From being a novice in this field and experimenting with the art of filmmaking, to witnessing such a milestone achievement, he has come a long way.

I personally know Sanbarta as an extremely hardworking person and a very friendly batchmate. I had an opportunity to interview him and it was great knowing his thoughts and opinions, while he also shared some BTS stories of the film. As for the readers, please watch the film if you haven’t already!

Here’s an excerpt from the interview:

Q: First things first, congratulations on this milestone achievement! Tell us about your love for cinema and when did you realise you just wanted to make films now?

Sanbarta: “To be very honest, for me, there was no definitive moment. During my early teens, I aspired to be a cricketer. But in 2015, I had to drop the idea because of academics. That’s when I took up watching films as a hobby. Initially, it was just mainstream commercial Bollywood Cinema. I remember going to the theatre to watch ABCD 2. I know many people look down on that film, but the vibe and aura of the full house theatre energized me when everyone started cheering loud “India! India!” Somewhere, the spirit was born that day. The film ‘Wake Up Sid’ inspired me in many ways too. I was late to the party but I decided that here is where I want to stay. Later on, I embraced films from other genres and languages and started liking them. By this time, I knew that this was more than a hobby.”

Q: Tell us about your film ‘Dhaar’. Where did the idea come from? Is there a specific reason for choosing a regional language?

Sanbarta: “I was in Pune when the idea struck my mind. This might sound surprising but the climax is what came to me first, then I created a whole story to incorporate this. I thought of the twist and then backed it up with the story! I believe I have a strong grip over Bengali and writing the script in Bengali felt more personal. If it was any other language, I had to hire someone to write the script which honestly wasn’t fitting our budget as well. The story was based in Kolkata, so we wanted to make it look a bit more authentic.”

Q: I’m sure as a filmmaker, you might have some films that would’ve been influential in your art. Name some of them and tell us how they have inspired you?

Sanbarta: “I think we all don’t have just one favourite film. I have so many favourite films because each one is unique in its own way. I have mentioned Wake Up Sid as a film that has inspired me. If asked to choose a few, I would include Kapoor & Sons, Definitely Maybe, Paths of Glory and basically any Zoya Akhtar film. One thing I like about all in common are their scripts. Beautifully written! On the other hand, my favourite director from Hollywood has to be Danielle Chazelle. I mean, La La Land and Whiplash are something magical right? I would also like to mention SCMC’s role in helping me change my way of looking at films. Due to courses like History of Indian Cinema, AV Post Production and Film Appreciation, I look at films in a much deeper and more impactful manner. I owe a lot to college for this.”

Q: Considering the pandemic, it would’ve taken double the number of efforts and time to shoot this film. Do you want to comment on your experience of shooting a film during the pandemic?

Sanbarta: “The pandemic has surely been a huge obstacle for everyone in the industry and it had affected too. My team and I had planned to shoot this film in March 2020, but it kept on getting delayed for several reasons until March 2021, when we finally shot the film. There were only a limited number of people on set, hence everyone was multi-tasking. Should I give a spoiler? Oh no, it’s alright. Watch the film (chuckles). Video calls were of major help while preparation. We had problems finding shooting locations, but that too was managed. My Director of Photography (DoP) named Devdeep came up with a hack that helped us save a lot of time – the café scene has actually been shot using three cameras. So, we were doing a master shot and Over the Shoulder shot together.

But looking at the greener and positive side, we could save a lot of money for the film while it was pushed! My approach is that there are so many people out there who don’t get a chance of making films, but I got the chance and I ensured I should make the best and most of the available resources.” 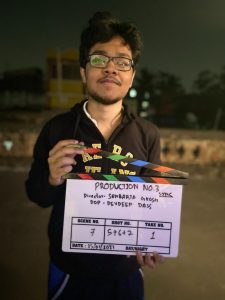 Q: Finally, do you want to throw some limelight on your existing and upcoming projects? Are you looking forward to anything?

Sanbarta: “Haha. I have tried to involve myself in some interesting projects in the past year. I was the Writer, Director and Co-Producer of Dhaar. Platform 3, another film written and directed by me was released on YouTube. I was also a part of this docu-series called ‘Beyond the Dust’ which was shot over a period of 4-5 months. I was the Assistant DoP and Editor. Talking about my upcoming projects, I have recently finished one more project with the protagonist of Dhaar as he is a director himself. It will hopefully come out in May or June. There is one more film I’m working on as the Director’s Assistant. I am looking forward to all the upcoming projects and even more excited to share them with all my fellow cinema lovers!”

I had a great time speaking to Sanbarta. We shared some recommendations and talked about his upcoming projects. I was inspired by his passion for the art and his dedication to always do his best. Don’t forget to watch Dhaar, now streaming on Disney + Hotstar!