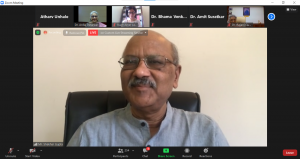 For students, the lockdown has become a humdrum of online classes and monotone schedules. To break the boredom of online college came the Symbiosis Litfest, spanning two days on the 17th and 18th October 2020. The litfest saw many eminent personalities from various fields interacting enthusiastically with students. The second day of the Litfest began with a session by senior journalist Shekhar Gupta.

Shekhar Gupta is a distinguished Indian Journalist and Author who has been awarded the Padma Bhushan for his contributions to journalism. Under his leadership, The Indian Express won the International Press Institute’s Award for Outstanding Journalism thrice. He was also elected President of the Editor’s Guild of India in 2018. He is the founder and editor-in-chief of The Print, founded in 2017 and continues to be a shining figure of Indian Journalism.

He talked about the phenomenon Trial by Media. The session was especially relevant in present times, with the recent coverage of certain events and the unearthing of the TRP fudging scam. The session was moderated by Dr Ruchi Kher Jaggi, Director of SIMC. With more than four decades of industry experience across Print, Broadcast and Digital Media, Mr Gupta brought great insights to the session. The session started with him recounting the monopoly of Doordarshan and All India Radio over news, and also their lack of credibility. He recounted how people did not trust government news broadcasters and depended on the BBC for credible news. With this, he talked about the importance of private news agencies and how they came into play after liberalization in 1991.

Highlighting the importance of the Kargil War in news reporting, he pointed out how honest reporting during the war helped Indian News finally get its credibility. It has been a long journey since then, and more media houses have come up, increasing the competition in an already low-profit industry.

Shedding light on the first-ever instance of trial by media, he talked about the India Against Corruption movement and how everyone brought into it and ran the propaganda unquestioningly on their news channels. It is during this time that news channels started conducting trials in their debates, and the trend has picked up since.

Nowadays, he says, “the economy of news channels doesn’t match their Taj Mahal size egos (of news anchors and owners of news channels)”. News channels aren’t highly profitable and their revenue is controlled by TRP. The better the TRP, the better the advertising revenue. Hence, news channels are now ready to go to any length to get more viewership. Therefore, there are no news bulletins today, only controversies that are sure to get viewers. If there are no controversies, then they are manufactured, as
we saw very recently. He opines that, when you discuss controversies and polarising topics in prime-time debates, they are bound to become trials.

Talking about the attitude of News Anchors today, he says “we have become judge, jury, executioner and Lord Almighty!”. He thinks that anchors today are either comedians or villains or both. According to him, people watch news channels not for news but for cheap entertainment. He calls this phenomenon the ‘Salman Khan’isation of Indian News. Anything remotely controversial and entertaining will get TRP.

Upon being asked about cancel culture and trolling, he said he doesn’t like it. According to him, if you want to take the liberal debate forward you should not cancel. Responding to the same question he said that he doesn’t pay attention to nameless trolls and it doesn’t bother him. Towards the end, he also talked about The Print’s latest initiative- Campus Voice and urged students to submit their responses and opinions, thereby destroying the opinions industry.

The session was very illuminating for the students and it gave them a better understanding of the workings of media today. Students, especially those of Symbiosis Center for Media and Communication, will cherish it and look forward to attending more such sessions.

Previous PostThe Pandemic Promotes Pictures, Siddarth points the camera to the film industryNext PostCreating and Ideating with the Best in the Business
0Shares