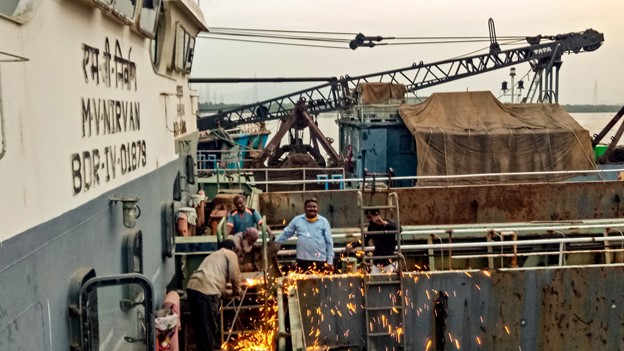 Just a few hundred metres away from the hustle and bustle of the CBD Belapur railway station in Navi Mumbai is the Belapur Creek. The quaint creek is my usual hangout. It has an odd charm, offering an escape from stressful monotony. This creek is also home to the local fisherfolk and is always bustling with small ships and trawlers. In the lockdown, however, I saw it turn from a dock for fishing boats to a graveyard of decaying and rusting ships. All activity at the creek came to a halt, the fishermen trapped. For nine months I saw these fishermen live an isolated existence and that is what drew me to talk to them. Talking to them made me dig deeper and I was confronted with the harsh realities they are facing. I regret not talking to them sooner but it compelled me to write about their hardships, which a lot of us have conveniently ignored. 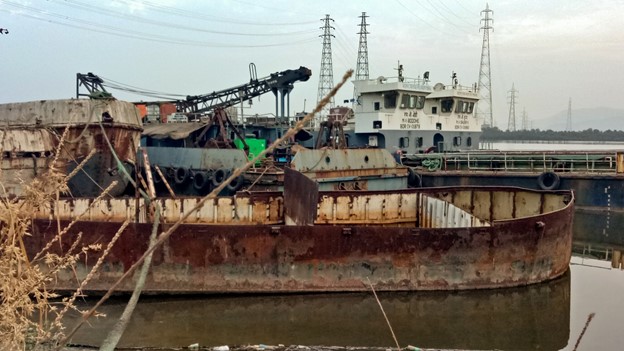 “Since the lockdown began I have made zero earnings. (In March) I saw my friends dump their catch back in the water because there were no buyers. The docks, the markets, everything was shut. The traders had left. Bilkul Sannata.” says Mahesh* who lives on the MV Nirvan.

The fishing industry is heavily dependent on labour. It suffered terribly when the lockdown began after a four-hour notice. The lockdown aggravated fishermen’s woes, who were already suffering from a bad fishing season. The industry which relies on a network of traders, exporters, stockers, migrant workers, markets, ice suppliers and restaurants suddenly saw all aspects of the network affected by the lockdown in some capacity. Traders at all major docks in the city had shut shop. Ice factories and ice suppliers had stopped operating. Fish markets and restaurants were closed. Small fishermen, like the one at the creek, suddenly found no takers for their catch. All avenues for their earning had come to a grinding halt.

“I left my village around 5 years ago to work with Mahesh Kaka on his boat. In the village, sooner or later everyone leaves” Says Mani* who looks after the maintenance of the boat.

Fishermen like Mahesh and Mani leave their villages in the Konkan region of Maharashtra to work in the city of dreams. The city allures fishermen with its robust network, strong unions and perennial work. However, as soon as the lockdown began, the city turned its back to the fishermen’s troubles.

The ensuing pan-India travel ban trapped them in the city in harsh conditions. Soon, Social distancing became the mantra of life. While it is easy to preach about social distancing, it is only the privileged who have the means to practice it. These fishermen do not have homes in the city. They live on their boat and spent the entirety of the lockdown crammed in the cabins. 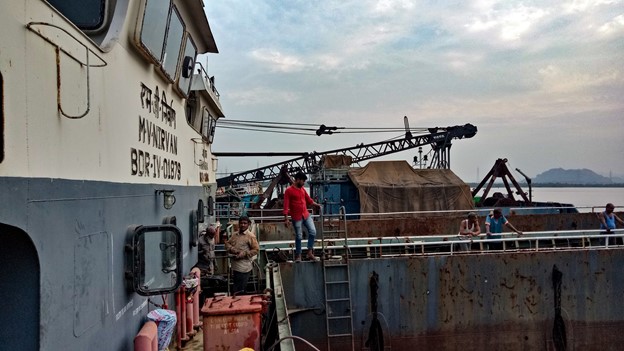 To compound this problem, they also had to upkeep the maintenance of their boats with meagre savings. Mahesh talks about rising prices and dwindling savings “My savings ran out quickly. I had to buy things like (cooking) oil and kerosene at double or triple the market price. The price of diesel also kept on increasing- but we had to keep the motor running or else it will stop working”.

Their earnings suffered more due to the annual fishing ban on the west coast from June 15th to July 31st. The fishing ban was actually reduced this year by 14 days to give them extra days of earning. However, this move was unscientific as it interfered with the fish spawning season in an already depleted region and put fishermen at the risk of violent weather. The National Fishworkers’ Forum termed it as a move to escape responsibility by the government. Instead of providing monetary relief, the government chose to put the fishermen’s lives at risk.

It has been almost ten months since the lockdown began, and the ships docked at Belapur Creek have not left for fishing. While there is no explicit ban on the fishing activity itself, fishermen continue to struggle as the lockdown affects every aspect of the industry network and value chain.

“The government hasn’t provided any help. No one reached out to me.” says Mahesh.

The government has failed to provide relief to fishermen across the country. The only fishers-centric scheme the central government launched during the lockdown was the Pradhan Mantri Matsya Sampada Yojana (PMMSY).  It talked about improving fishing infrastructure and doubling fishers income. It, however, did not provide any relief or financial assistance for hard-hit fishers. On contacting the National Fisheries Development Board (NFDB) for a comment, only the PMMSY was cited as a relief measure. They failed to provide any information about other relief measures.

The government apathy continues even at the state level. On reaching the Joint Commissioner of Department of Fisheries, Government of Maharashtra for a comment, he only talked about how the state had released a Standard Operating Procedure for socially distanced fishing activity. The SOP calls for workers to maintain distance while on board. It also asks fishermen to not touch their catch while returning. How this SOP is practically feasible remains a riddle for the fishermen to solve. He also insisted that the government did not discourage fishermen from going to the sea. The SOP, however, explicitly discourages community fishing. He also pointed out the existence of WhatsApp Groups and Emails for sending out information. Mahesh was not aware of any such WhatsApp groups.

The commissioner failed to talk about how the government plans on tackling a disrupted supply chain due to the lockdown measures. He also cited the lowered demand for seafood due to closed restaurants as a reason for the government not being able to provide any relief or financial assistance to fishermen.

These lacklustre and ill-thought “relief measures” are a testament to the government’s unwillingness to help fishermen. Even after ten months, it continues to wilfully ignore the fishermen’s plight. The only help they received during the lockdown was from civil society organisations and good samaritans.

“Close to ten months have passed and we still don’t know when it will be possible for us to take out our boats. I have only visited my family for a few days after the government allowed travel. I can’t leave, who will look after the boat?” Mahesh says.

Even as 2021 began, they still don’t know when they will be able to take their boats out and start earning a living. The fishing industry provides livelihoods to 16 million fisherfolk. It is the small migrant fishermen, like the ones at Belapur Creek, who continue to suffer anchored to desolation. This creek is not an isolated incident. This story also holds true for the millions of fisherfolk across the country who are suffering from similar circumstances. It is high time that they receive aid and assistance from the government.

After talking to the fishermen I realized how easy it is to ignore the hardships of millions. As a privileged citizen, it was very easy for me to go back in my bubble and forget even after seeing them at the creek regularly. It took me nine months to acknowledge them and understand the extent of their troubles. The fishermen continue to be victims of civic apathy. Their plight begs for our attention and is too worrisome for us to just look away.

Previous PostSoaring over every hurdle, Crane Bedi lifts the curtain on perseveranceNext PostBehind the Scenes of Bollywood
0Shares