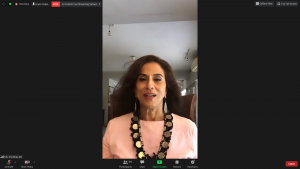 The chill of October has set in, and so has the anticipation of festivals- well, for some of us, literary festivals to be precise. In this period, when its officially time for Lit Fests to kick in, the COVID-19 pandemic has brought the world to a halt. Thus, for most of us, the excitement which accompanied listening to the wise words of an academic, warm cup of chai in hand and an auditorium full of inquisitive people, felt like a dream far from coming true; and then, the Symbiosis Lit Fest happened.

Symbi students always have an edge over others, and this became a fact for us when the brilliant line- up for Symbiosis Lit Fest 2020 was revealed. Several big names in both fiction and non-fiction writing, journalism and Bollywood were lined up for the students to listen to. Here, one name stood out, as hers always does- Ms. Shobhaa De, renowned columnist and novelist, devoted a chunk of her precious time to answer the questions of knowledge-hungry students.

Shobhaa De is a name which comes up aligned with controversy and clarity- a woman so fearlessly unapologetic for her thoughts and opinions, Ms. De’s words were an inspiration for every person watching her in awe on their computer screens. With so many deeply personal anecdotes and stories of her own successes and failures, she gave students a glimpse into her personal journey from a model, then a journalist and eventually a leading columnist and novelist.

In conversation with Dr. Anita Patankar, Director, Symbiosis School of Liberal Arts, Ms. De talked about her latest publication ‘Lockdown Liaisons’, a 24- story account of personal tales both from the perspectives of women and men. She spoke about how the book came about as the need to document human lives amidst a never-witnessed-before global pandemic, and how necessary this documentation is to explain this historical turn of events to upcoming generations. She also highlighted how the pandemic has somehow managed to contribute to a self-esteem boost for several females- instead of finding comfort in secondary roles, they have begun questioning things and focusing on personal growth.

A major portion of Shobhaa De’s writing has focused on celebrating the lives of women- elaborating on this, she dwelled upon how every woman in this country, irrespective of whether she is well- known or not, has inspired her to use her privilege for good. Citing Michelle Obama to be one of her role-models, Ms. De emphasized on the need to have more women who are a threat to the patriarchy; only with this will our country be able to evolve and grow into a safe space for females.

When asked about her writing process, Ms. De was gracious enough to give us an exclusive glimpse of her upcoming novel, ‘Srilaaji: Diary of a Marwari Dowager’, a story of a hard-working, fearless woman who is completely in-tune with her own sexuality without any inhibitions. She talked about how once she completes a book, it no longer belongs to her, but to the world out there. She believes that as a writer, one should write for their readers and not for themselves. As beautifully summarized by her, “Any writer who cannot take a risk cannot be called a writer”. Ms. De also spoke about how writers are responsible for every word they write, be it in a 500-page novel or a 240-character tweet.

Addressing the audience, she shared her mantras for staying relevant in a time which keeps fluctuating every second- have your ear to the ground (empathize with others) and enjoy being in the today. She shared her personal writing experience wherein she prefers writing about ‘Indias within India’, instead of painting a goody-goody picture of a country which has by-far failed to protect its women. Talking about how she handles troll armies and pressure from political groups, Ms. De firmly emphasized on how, in her 30+ years of writing on ‘controversial’ topics, she has never allowed anyone to trample her identity or her spirit. Advising the same to the upcoming generation, she spoke about balancing the personal and professional and prioritizing things as per your own standards and definitions, and not anyone else’s. We were lucky to witness her profound thoughts on issues that people in the limelight shy away from, and her advice came as a boon to those aspiring to be writers, columnists, and journalists.

“Being a writer comes with an enormous risk; it’s a discipline, a vocation, a craft- almost a religion for some. To gamble on yourself is the best gamble in the world- if you’re passionate enough.” – Shobhaa De