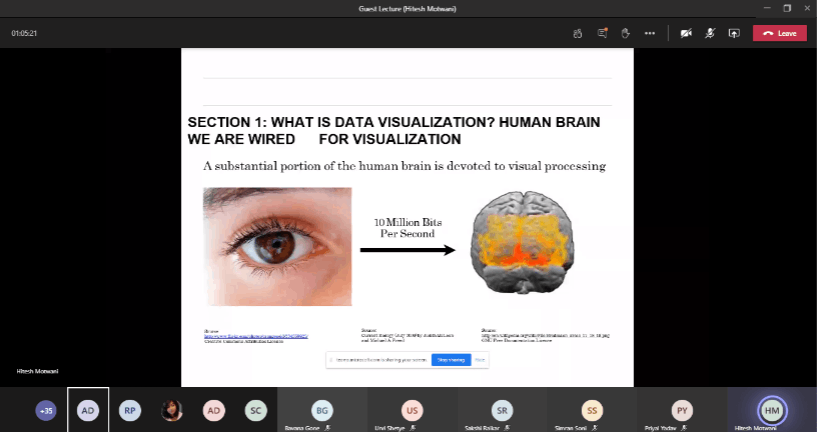 On October 1, 2020, SCMC’s batch of 2021 had a lecture on digital marketing by Mr. Hitesh Motwani. A digital marketing consultant, trainer and speaker, Mr. Hitesh has consulted firms such as Twitter, Tata Group and Mahindra. He has also trained over 62,000 participants till date.

The session began in earnest at 2 pm, with Mr. Hitesh all smiles as he began his lecture. He said he became a PR person because of his sister, who told him that PR personnel make people famous. He was hooked and subsequently made the shift from finance to PR. He went on to open Skillopedia, his own company which dealt with strategy, consulting and design.

Mr. Hitesh spoke about data visualization, and how it helps visualize data in a friendly manner. It also helps get insights from people you wouldn’t have received otherwise. He emphasized that everything we see or do today is data. Data is so powerful that a single data point has the ability to make or break a company.

He shed light on data research, and how it is very complicated. You have to clean a lot of data to get inside it. It is a very experiential process. He spoke at length about data scientists and how they make data more meaningful and interactive. He provided a jaw-dropping stat, which was that 88% of the entire content on the web today has been formulated in the last four years.

He went back to data visualization for a moment, and provided various examples of it, which included some fascinating ones like horoscopes, social media, streaming platforms and military allotment. He then spoke about the challenges of storing data, and that it is done through servers. Companies make big data warehouses to store data. He concluded his lecture by speaking about the scope of the field, and how with the right amount of skill, dedication and hard work, one can make it big.