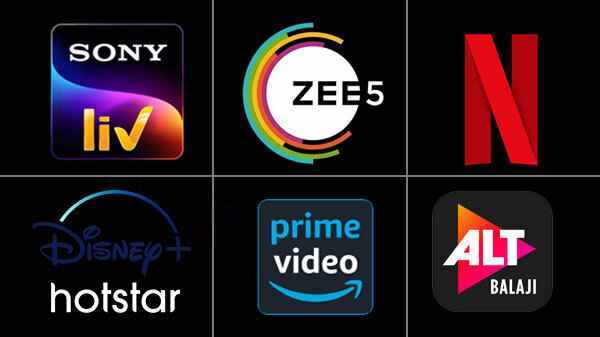 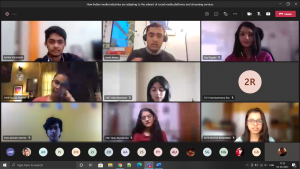 In his apartment on an early Berlin morning, Dr Smith Mehta leans toward his webcam, ready to tell students on the precipice of starting their careers, how they’re going to be the ones carving the digital media space, and why it matters.

It also happened to be a momentous morning for him— two hours before he addressed the second-year batch on the 5th of March, he was awarded his doctorate from the Queensland University of Technology, where he’s also a Sessional Academic, for his PhD thesis on The New Screen Ecology of India. A Symbiosis alumnus, having completed his master’s from SIMC in 2013, Dr Mehta then obtained a Post-Graduate Diploma in Media Laws from the National Academy of Legal Studies and Research. He has worked with Viacom 18 on various content and production teams and has several works to his credit.

Having earlier addressed the first-year batch on 3rd March, Wednesday, he recounted about how Indian media industries had begun to adapt to the advent of social media platforms and streaming services. Despite his impressive resume, there was none of the aloofness one would expect; his casual manner and occasional sarcasm reeled the students in.

The session was interactive from the get-go, as students were asked to fill up a quiz that laid out the realities of the audio-visual industry in India. “Most content gets created on soap operas, but unfortunately it’s saturated,” he said, addressing the first-year batch. He explained that this is one of the reasons that diverse media content tends to find a home on online streaming platforms.  Even though consumers have increased, there still exists a digital divide, said Dr Mehta, which hinges on caste, class, and gender privilege. 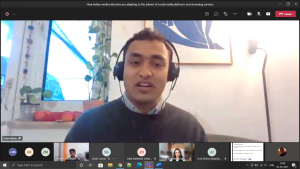 He talked about the Indian new screen ecology, and how online creators are now using intermediaries (like talent agents) to succeed on social media platforms and streaming portals. Raising the curtain on how streaming services operate, he underlined the importance of an algorithm that recommends content, and how it uses data from users to do so, Amazon Prime Video being an example, as they can use the data from a person’s shopping history.

Dr Smith Mehta also made sure to mention the role of platforms such as YouTube and Facebook in starting this revolution. Their success was a blueprint for the streaming giants that came next, who incorporated elements that worked on social media platforms, like stand-up comedy, to attract viewers.

However, digital media has its cons. There is a precarity that comes with it, he said, as the content put out ultimately reaches viewers through an algorithm which is not under the control of the creator. Capitalistic logic can also intervene and change what kinds of content the algorithm caters to, as with Spotify, who formerly used to encourage indie music artists.

When asked about his favourite things to watch, he recommended the show Patal Lok, and the Iranian director Asghar Farhadi’s films, especially A Separation.  Students peppered him with more questions about the industry, and when asked about whether the television industry will evolve, he urged students not to lose heart. Though change is slow, it is happening, he divulged, but to have a true cultural shift, participation of women in the industry is crucial.