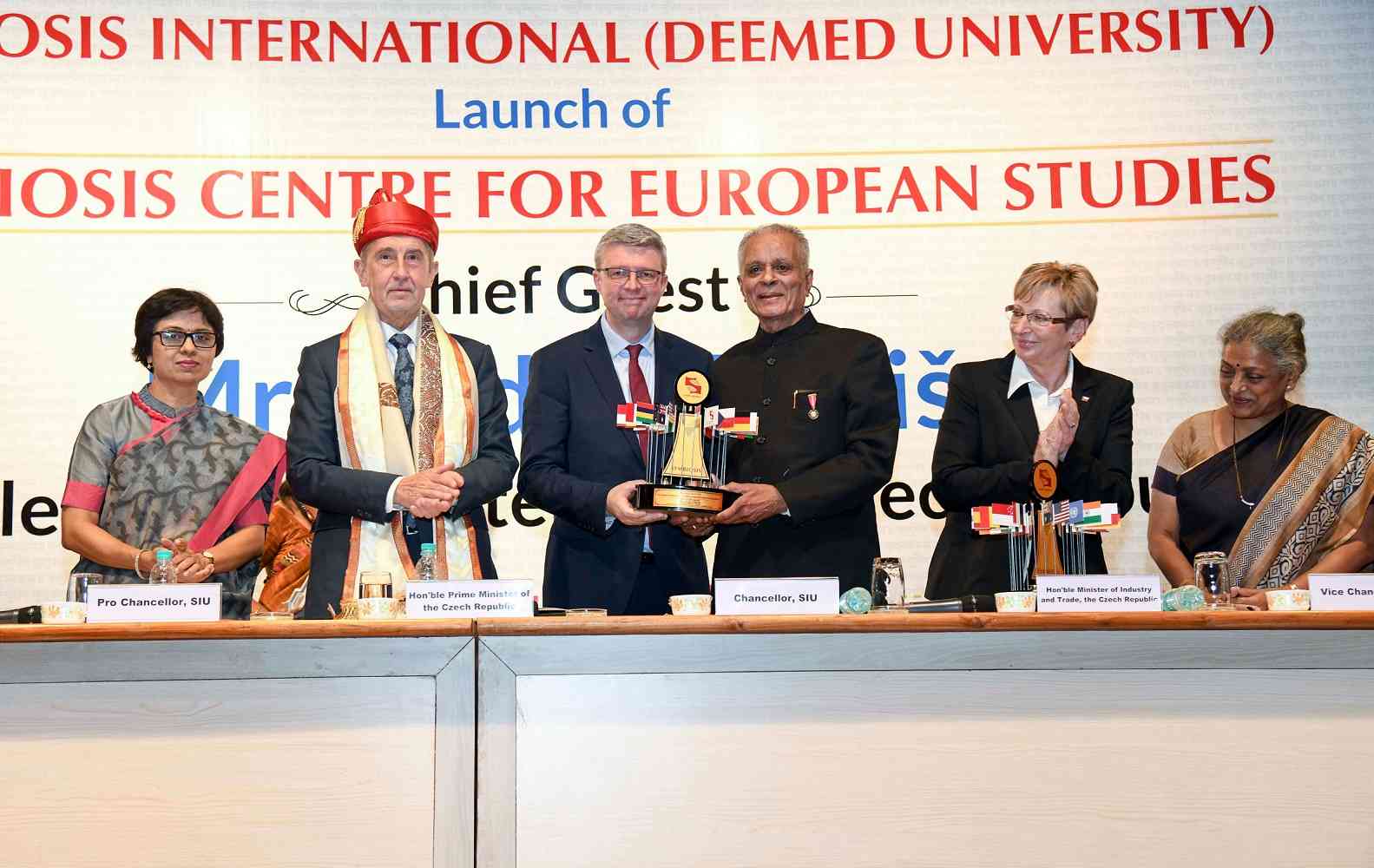 Andrej Babiš, the Prime Minister of the Czech Republic, visited the Symbiosis Viman Nagar campus on January 19 to inaugurate the Symbiosis Centre for European Studies. The institute is meant to promote the study of European culture, language, history and politics, and offer training and consultancy services to corporations. A tie-up that enables Symbiosis Law School students to opt for a European Legal Studies programme may also be explored in the future.

Babiš is the first Head of State to visit any campus of Symbiosis International (Deemed University).

He was accompanied by Marta Nováková, the Czech Minister of Industry and Trade; Milan Hovorka, the country’s Ambassador Extraordinary and Plenipotentiary, and Karel Havlíček, the Vice-Chairman of the Czech government’s Council for Research,Development and Innovation. The event was hosted by Dr. Vidya Yeravdekar the Pro Chancellor of Symbiosis International (Deemed University) (SIDU), and Dr. S. B. Mujumdar, the Founder and President of the Symbiosis Society. Also in attendance was Dr Rajani Gupte, the Vice Chancellor of SIDU, and members of Pune’s entrepreneurial Poonawalla family.

After the lighting of the lamp, Dr. Yeravdekar delivered the opening address, where she proposed multiple ventures to Babiš and his cabinet. This included the possibility of collaborating on law and artificial intelligence programmes for students. The major proposal, however, was the creation of an Indo-Czech Chamber for Education and Culture. It would be called the Symbiosis Takshashila Chamber, in honour of the ancient seat of learning in Bihar.

Echoing Symbiosis’ philosophy of connecting the world, Dr. Mujumdar took the stage to recall Earthrise, the iconic photograph of our planet taken aboard the Apollo 8 mission in 1968. He noted the obvious lack of walls and barriers, and urged the audience to look beyond divisions in the search for knowledge. “Just as there are airways, highways and waterways, can we create knowledge-ways?”

PM Babiš was then felicitated with a scarf and a token of appreciation from the Symbiosis Society, as Dr. Mujumdar placed a red Puneri pagdi on the Prime Minister.

International students studying at Symbiosis were then invited on stage to greet and present their country’s flag to Babiš.

Dr. Gupte followed, presenting the Uniersity’s flag to him, after which Mujumdar concluded the ceremony by presenting a United Nations flag as a show of global goodwill.

Upon taking the dais, the Prime Minister called it ‘an unbelievable welcome’. He then began his talk with a brief glimpse into his career graph, highlighting his government’s central policy foci – food, energy, fiscal self-sufficiency, and digitisation—that seemingly mirroring the Indian government. Babiš also mentioned how he had met PM Modi the previous day. He’d found it incredible that the Modi government was managing over a billion people, while Babiš struggled with serving the 10 million residents of the Czech Republic—Mumbai has a larger population than the entire country.

Two students asked questions in the audience interaction. Anwisha Thakur from Symbiosis School of Liberal Arts (SSLA) asked Babiš about current trade-based bilateral ties between the two countries, while a student from Symbiosis Institute of Design (SID) enquired as to what design and innovation policies had been employed to enhance the Czech youth’s awareness of their cultural heritage.

Addressing Thakur, Babiš felt that investors needed to visit India to deepen relationships, and cited the opening of a collaborative technological centre in Chakan as a step in that direction. As for the latter, Babiš noted it as a good point, and expressed regret that newer architectural wonders had not been built in his country after the Czech Communist Revolution; nor had enough been done to educate the youth about their history. However, he saw it as an opportunity for improvement. The inauguration was one of many stops in an official visit to India that started on Jan 17. The national tour aims to strengthen strategic relations between the two countries.